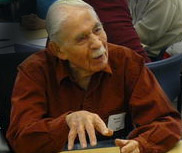 Below is a listing of stories focusing on the work and achievements of the Foley Center's participants. For more news about the School of Education and Social Policy, see the SESP News Center.