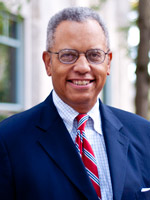 Eugene Y. Lowe, Jr. has served as assistant to the president of Northwestern University since 1999. He joined the senior administration of the University in 1995, as associate provost for faculty affairs. He also holds faculty appointments in the Religious Studies Department in Northwestern’s Weinberg College of Arts and Sciences and the School of Education and Social Policy, where he teaches regularly in the master's program in Higher Education Administration and Policy.

As assistant to the president, he oversees university program initiatives designed to enhance community and diversity in the university, coordinates the work of the faculty committee on recreational and intercollegiate athletics, and represents the university president internally and externally. He has served as principal investigator for the Mellon postdoctoral program in the humanities since 1996, and chaired university-wide committees on the status of underrepresented minorities and integrity in intercollegiate athletics. In 2008-2009, he began serving as the coordinator of the Mellon Mays Undergraduate Fellowship Program.

Externally, he represents Northwestern on the Faculty Advisory Council of the Illinois Board of Higher Education and on the Senior Diversity Officers Group of the Committee on Institutional Cooperation.

From 1983-1993 he served as dean of students (chief undergraduate student affairs officer) and as a member of the religion department at Princeton University.

A historian of American religion, his writings about religion, race and American culture have appeared in a number of books and journals, including the recently published Encyclopedia of Religion in America (CQ Press, 2010). He served as a member of the Teagle Foundation sponsored working group of the American Academy of Religion on the religious studies major and liberal education. His book, Promise and Dilemma: Perspectives on Racial Diversity and Higher Education (Princeton University Press, 1999) is based on work sponsored by the Andrew W. Mellon Foundation.

He has served as a consultant-evaluator for the United States Department of Education and the Pew Charitable Trusts. He is a member of the external Advisory Board of the Stanford University Center for the Comparative Study of Race and Ethnicity.

He is a trustee of Berea College, Berea, Kentucky, and Seabury Western Theological Seminary in Evanston and has served as president of the Board of Episcopal Charities and Community Services in Chicago.