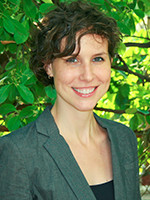 Quinn Mulroy is a political scientist whose research centers on the study of inequality (racial, economic, and gender) through the lens of the policies, citizens, and political institutions that can reinforce and/or challenge its persistence in American politics. She is particularly interested in studying inequality from the perspective of policy implementation -- not only by the government agencies charged with formally enforcing policy through top-down means, but also through the private citizens who can engage in informal and quite hidden actions that perform policing and regulatory functions. While many of her projects take a "long view" of politics and policy, and examine the historical development of inequality and implementation processes over time, she also employs other methodological approaches (such as interviewing, survey experiments, and statistics) in a number of ongoing projects to explore these questions.

Her forthcoming book, Agents of Litigation: How the American Bureaucracy Leverages Private Legal Power to Make Policy Work, explores how administrators in civil rights and environmental agencies – constrained by mid-20th Century legislative compromises denying them adequate administrative powers or resources – developed innovative and entrepreneurial strategies to mobilize private citizens to bring lawsuits against policy violators in the courts. At its core, this research project, seeks to better explain how rights protection actually works – and doesn’t work – in the U.S. In contrast to accounts of increased legal mobilization in the last half century that suggest private citizens and groups have defiantly turned to the courts to fulfill regulatory demands largely unmet by the allegedly weak American bureaucracy, this book reintegrates the actors and institutions that compose the administrative arm of the state into our larger developmental narratives of regulation in 20th Century American politics. Earlier versions of this project received the Leonard D. White Best Dissertation Award from the American Political Science Association (APSA) in 2012, and the 2012 Best Conference Paper Award from APSA’s Law & Courts Section.

As an extension of these lines of research inquiry, Mulroy also has a number of ongoing research projects examining the development and implementation of social policy addressing racial, economic, and gender inequality. The first explores the development of informal means for policing Title IX policy on college campuses and uses ethnographic observation and interviewing to examine how these experiences shape the legal consciousness of target populations and produce feedback effects for attitudes toward government institutions and political engagement. The second is a comparative project that examines how partisan positioning on social welfare policy in the U.S. and France is shaped by race, immigration, conceptions of “the other,” and the current rising populist tide. The third engages questions concerning the historical development of partisan approaches to the political framing of higher education policy, particularly with respect to programs that target minority and underserved student populations.

Each of these research projects is centrally focused on not just understanding policy ‘as written,’ but also how the implementation process shapes the politics of and the legacy of partisan and ideological position-taking on social policy. In doing so, this research agenda speaks to the importance of understanding the subtle interactions between state and society that occur in the process of addressing inequality – across substantive policy areas, institutional contexts, and historical moments.

A Chicago native, Mulroy received a B.A. from the University of California-Berkeley and a Ph.D. in Political Science from Columbia University, and after living on both coasts, now finds herself back in the 'middle' of things. Her work has been recognized by visiting fellowships and grants from the Miller Center for Public Affairs at the University of Virginia, the American Bar Foundation, Princeton University's Law and Public Affairs Program, the Institute for Social and Economic Research and Policy at Columbia University, and the Horowitz Foundation for Social Policy.

Mulroy, Quinn and Shana Gadarian (2018). "Off to the Courts? Or the Agency? Public Attitudes on Legal and Bureaucratic Approaches to Policy Implementation". Laws, Special Issue: Intersection between Law, Politics and Public Policy, 7: 1-18.
(