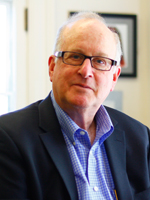 Dan A. Lewis’ research agenda provides an approach to studying social policy that meets the challenge of a profound transformation in social policy over the last 40 years. Gone are the days of new federal programs to solve national problems. The New Deal and the Great Society are seen by many as the source of our problems rather than solutions. Lewis’ work responds to these changes in the political climate.

In addition to numerous articles, Lewis has written or edited seven books in these areas, including Gaining Ground in Illinois: Welfare Reform and Person-Centered Policy Analysis (2010). At the Institute for Policy Research, he has directed major program projects on community reactions to crime, deinstitutionalization of state mental health patients and Chicago school decentralization. More recently, he conducted evaluations of the homelessness problem in the Chicago suburbs. Lewis also directs the Center for Civic Engagement, which encourages students to enhance their academic experiences through voluntary service and research to help build communities.

Lewis serves on many nonprofit boards and civic committees. At Northwestern, he served as director of undergraduate education at the School of Education and Social Policy.

Marquis Who's Who Top Educators

Lewis, D. A. (2005). New Deal to no deal: The movement toward less government is shifting social responsibility to the states.. Illinois Issues.

Pareja, A. S., & Lewis, D. A. (2006). The effect of parental employment on children‚s academic achievement in the context of welfare reform. Paper presented at the annual meeting of the American Sociological Association. Montreal, Canada.

Lewis currently heads a large-scale university consortium to study welfare reform efforts in Illinois. In another current project he is developing a new Suburban Action Research Project that will deliver technical assistance to suburbs struggling with social problems. It will concentrate on issues of homelessness and crime prevention in its initial phase.