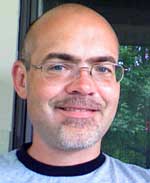 I attended the University of Illinois at Urbana Champaign (UIUC) for my bachelor's of science and master's of science in mechanical engineering.  After my master's work, I stayed in the UIUC community for another 15 years, where I continued my education at UIUC, while also gaining a variety of unique experiences as an  educator, scientist, and engineer.

I joined the Center for Connected Learning (CCL) as a consultant in the spring of 2004.  My initial work with the group included development of a high school chemistry unit (Connected Chemistry) for the Modeling Across the Curriculum project. This unit targeted high school chemistry topics related to the behavior of gases and chemical reactions while also developing students' understanding of systems, models, stability and change, and the nature of science. Later work, shifted to the development of instructional materials for the BEAGLE project, which was was a suite of NetLogo models and supporting materials designed to facilitate teaching and learning of concepts and phenomena related to evolution, adaptation, and natural and artificial selection.  I also co-authored three instructional units for high school with strong NGSS alignment, for the ModelSim project on the particle nature of matter, population biology, and evolution.

Engineering to Education
Before entering education, I was an engineer. I found this work most satisfying when I could apply my personal aesthetics and creativity to the engineering design process. From 1990-91, I worked at Fermi National Accelerator Laboratory as a structural designer as a co-operative exchange student where I developed designs for electrostatics tests of cavities and the assembly scaffolding for the initial assembly stages of the D0 particle detector array. In the early 1990s I worked as a private engineering consultant, mostly for Caterpillar, Inc, with Dr. Rich Ingram, Dr. Carl Larson and Dr. Kem Ahlers.  There I developed scientific visualization tools focused on fluid dynamics visualization in next generation hydro-electric fuel injectors  (HEUI fuel injectors) and I did industrial design work on ergonomics for the interior of a cab for a line of next generation backhoes (now included in the 420D/430D line of CAT backhoes). I researched autonomous vehicle control methods for Wheel Loaders and helped develop hardware, software, and graphics for the Caterpillar Virtual Prototyping System (1992-1995) (movie link). This system received national recognition in Discover, Newsweek, Fortune 500, CNN and variety of technical journals and trade publications.

But even though engineering work seem to fit some of what I liked to do, and even though these projects were challenging, I was also finding that other work related to teaching, education, and outreach was providing me richer meaning and satisfaction in my professional life. Various teaching assignments at the university in mechanical engineering and plant biology led me to learn more about and become more interested in teaching.

A series of experiences transformative experiences with Charles M. Weller and Don DeCoste in C&I 101 and Ed Dole in a introductory biology course for science teachers (PlantBio100) helped me adopt a teaching and learning philosophy heavily grounded in constructivism. Inspired by their example, I was motivated to take additional teaching courses (thinking at that time that I might teach college). These experiences led to very positive pre-service teaching experiences that I had in the Champaign middle schools.

While this was happening, I also was seeing and hearing incredible success stories from my wife's (Dawn Novak) efforts to build a de-tracked, differentiated, and constructivist learning environment in her 6th grade mathematics classroom at her school.

Through Dawn's example and the experiences I had working with middle school students in my education courses, I became hooked on becoming a middle school mathematics and science teacher just like her.

I received my teacher certification in 1995, left engineering, and became a full middle school teacher that year, at Urbana Middle School, whereI had student taught with my cooperating teachers: Jan Hari and Kevin Erlinger. For the next five years, I worked in the Urbana and Champaign middle schools, first as a regular classroom teacher in Urbana, and the remaining years later as the gifted teacher for middle school science and mathematics students in Champaign. While teaching, I evaluated some science education outreach efforts at UIUC, served as a regional and state judge for the Science Olympiad, and trained in-service teacher educators in computer-based teaching and learning tools.

Education to Instructional Design
As I taught, I found myself doing lots of instructional design work for students in my own classes, as well as for the fifty other middle school teachers I co-taught with in my role as gifted math/science specialist in Champaign schools.  And as I did such work, I realized that there was a lot of overlap in how to think about designing effective instructional materials that could draw on design principles both from engineering and from the learning sciences. I began to wonder, “What kind of tools would help me become more effective at high quality instructional materials design?”

I began piloting materials from the Connected Mathematics Project, which gave me more ideas about the nature of instructional supports that needed to be designed into materials, if they were to support socially constructed learning. I looked for more materials that took a similar approach in how students might learn science.  Here, in the late 1990s, I encountered frustration with the lack of such materials in my search. I started to think, “Why are there so few well designed instructional materials in science?”

In 2000, I joined the Shodor Education Foundation and the National Center for Supercomputing Applications (NCSA) at UIUC as a mathematics and science education specialist. I worked on various projects funded through the U.S. Department of Education and National Science Foundation to prepare tomorrow’s teachers to use technology. Here I developed some initiatives related to instructional materials design for science literacy with Project 2061 of the American Association for the Advancement of Science along with Ted Willard and Dr. Francis Molina. This work fueled my growing passion for mathematics and science education reform and moved me to become very focused on the critical role of well-articulated learning goals in the design and implementation of instructional materials.  I continued collaborating with Project 2061, as part of their science assessment work and on other instructional materials design projects. From this research, I became very interested in finding an answer to a new question, “What kind of computer based tools could help support innovative instructional materials design in science?”

From 2000 to 2003 I became more heavily involved in training educators and researchers in the use of computer based teaching and learning tools. Some of the tools included TI graphing calculators, digital probes, NetLogo (and StarLogo), Web-based Science Inquiry Environment, World Watcher, Project Interactivate, Stella, RiverWeb, Mathematica, Chemviz and Biology Student Workbench. I co-conducted seminars and workshops for in-service teachers and faculty in computational science, modeling and visualization with EdGrid, the National Computational Science Leadership Program, the SuperComputing 2002 (SC2002) Education Program, the SuperComputing 2003 (SC2003) Education Program, Revitalize, the National Computational Science Institute, and CSynergy. In the summer of 2003, I was also the lead instructor for the UIUC College of Engineering weeklong G.A.M.E.S. computer science camp for 8th-9th grade girls, which used NetLogo as a platform for the students to create their own computer games.

In 2003, I moved with my family back to the area that my wife and I grew up (northern suburbs of Chicago), in order to bring our two kids closer to their grandparents.  As part of that move, I was offered a teaching position at Park View School District 70 in Morton Grove, Illinois in 2003.  This is where I taught science, social science, and mathematics until 2018.

In 2006, with the support of our administration and staff, our school adopted very progressive educational materials to pilot in the middle grades for mathematics and science.  We implemented and piloted many reform based science units, including ones from both IQWST (Investigating Our World Through Science and Technology) and PBIS in the pilot phases for both of those programs.   During that time, I continued designing instructional materials with Dr. Uri Wilensky through the Center for Connected Learning, and currently I teach the science methods course (fall quarter) and co-teach the science a project-based science education course (winter quarter) with Dr. Brian Reiser.