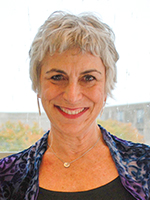 Sandra Waxman is a Louis W. Menk Professor of Psychology and an Institute for Policy Research Fellow, with a joint appointment in the School of Education and Social Policy at Northwestern University. She received her PhD from the University of Pennsylvania and taught at Harvard University until beginning her affiliation with NU in 1992. She is an APA Fellow and an APS Fellow, and is a recipient of both a Cattell Award through the American Psychological Society and a Guggenheim Fellowship.

Professor Waxman’s research focuses on two areas of study: biological thought and culture, and early linguistic and conceptual development. Recent work in biological thought explores how notions of the natural world unfold -- across development, across cultures, and across languages, exploring fundamental questions, including, “What is the place of humans within the natural world?,” “What does it mean to be ‘alive’?,” and “How do children across cultures develop these concepts?” Professor Waxman’s research in Linguistic and Conceptual Development employs both developmental and cross-linguistic evidence. Both are essential in discovering the origin of infants' early expectations, identifying which might be universal, and specifying how these are shaped by experience with the native language under acquisition. This basic research may serve as a springboard for assessing young children being raised in bilingual environments and those with specific language impairments.